First up it was another clash of the FBCF teams as FOTS faced off against Goodfellas. FOTS could not find their hitting stroke all night. Goodfellas finally found a good rhythm in the third and fourth innings, scoring 11 of their 12 runs in those innings as they pulled off a 12-1 victory.

Next up Goodfellas took on the Rounders. Goodfellas maintained a lead throughout, but it was never a comfortable lead. After three innings Goodfellas led 8-6 and then they extended their lead to 11-7 after four. As the home team, Goodfellas got the final three outs for the win and moved on to the championship game against SECOC for the second time in a row.

The first two innings of the championship game were marked by a combination of poor hitting and good defense by both teams. As the home team coming into the bottom of the third, SECOC was down 2-1. All of a sudden Goodfellas opened the door for them with a few errors. Combined with some timely hits, SECOC scored 5 runs in the third to take a 6-2 lead. At least 3, maybe 4 of those runs were gifts given by bad defensive plays from Goodfellas. The next two innings went similar to the first two, with Goodfellas scoring 1 run in the 5th to make it 6-3 as they entered the sixth and final inning. After a lead off out, things were looking grim, but Taylor got the ball rolling with a hit that was the beginning of four straight singles. Larry hit the fourth single to score both JP and Sumrall to tie the game 6-6. Larry advanced to second on the throw into the infield. After an out by Groux, I can't remember if Larry advanced to third or not. It doesn't matter...all that matters is Guidry came through with the go ahead single and RBI as Larry scored to put Goodfellas up 7-6. Unable to score any insurance runs, Goodfellas took the field needing to hold them to 0 for the win or 1 to go to extra innings. The defense held! Larry fielded a grounder to short for out number 1. JP ran a long way in from right center to make a good catch at full speed for out number 2. Taylor capped it off with a can-o-corn fly ball in deep left field to seal the victory. 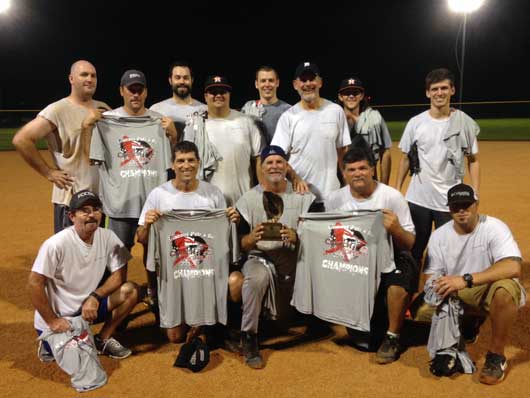